Final Exams: Cancelled due to Covid-19 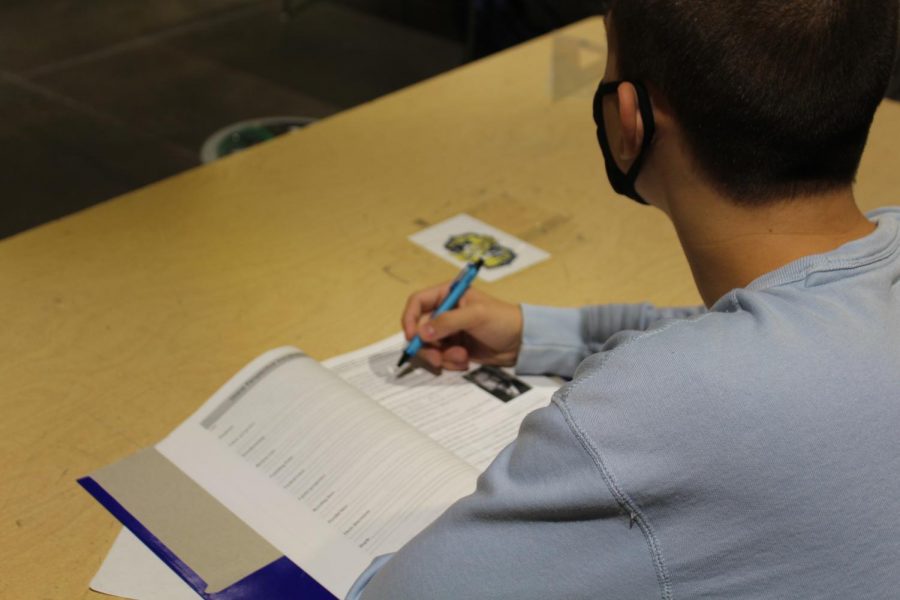 Pencil to Paper. Sophomore Dylan Matteson writes down information about some notable artists in his art foundations class. Art foundations is an entry level class that students have to take to be able to move up to a higher level of classes.

Final exams, more commonly known as finals, has been an ongoing debate in the school district for several years. However, this year, the COVID-19 pandemic caused the board to rethink the idea of finals for the 2020-2021 school year.

This year, the administration decided finals would not be fair to students as some students are doing ViPR and some participating in the hybrid, in-person schedule. Principal Steven Miller has been part of the finals discussion.

“It’s going to take us twice as many days as it normally does, and so we felt like finals would impact instruction too much. When our students are only here every other day, then we’re going to take another day of the finals schedule, where they spend 90 minutes just testing, and they miss instruction in other classes. We just thought we couldn’t justify that,” said Miller.

When considering the pros and cons of the situation, the administration decided making students take finals and dealing with the conflicts could not be warranted. This decision is fully supported by the staff, including head of the science department Patrick Hemmingsen.

“I’m okay with it. Having all of that hard work leading up to the end was probably causing more stress than was necessary.” said Hemmingsen.

Miller was also concerned about student stress levels during this troubling time. He is supporting the decision he thinks will most benefit the students. He does not feel like the school should add more strain to students’ personal and academic lives.

“I think it will definitely be more beneficial for this particular year. The last thing that students probably want to do every other day is have to worry about studying for finals when they’re already struggling with the system that we have,” said Miller.

Even during regular years when finals are taken, there is conflict about the benefits versus the stress. Sometimes they can be helpful, while other times they can drop a student’s grade a whole letter. However, moving forward, finals may not be a fixture in our future.

Senior Joel Miles has participated in finals for the past three years. He feels this decision is the most fair to students, and this year will not be too different for him than previous years, as he usually does not study.

“I think the finals decision is the only fair choice for most students. Honestly, I don’t go out of my way to study for finals much in a normal year, so this personally won’t affect me too much. It will be nice to not have to worry about them though,” said Miles.

Senior Brendan Fuller, however, feels the decision will impact his year more than it usually does. He usually plans his amount of studying around his grades in the class.

Teachers are also supporting this decision, and they plan on doing something in place of the usual exams during the finals season. The administration would like the different departments to have some consistency throughout them on their specific approach. Mr. Hemmingsen talks about his plans for this year’s changes.

This year has been trying and eye-opening for a lot of students as they are adjusting to this new normal. However, when it comes to finals, some stress may be alleviated after the decision not to have final exams this year was made.