The reality of Valentines Day 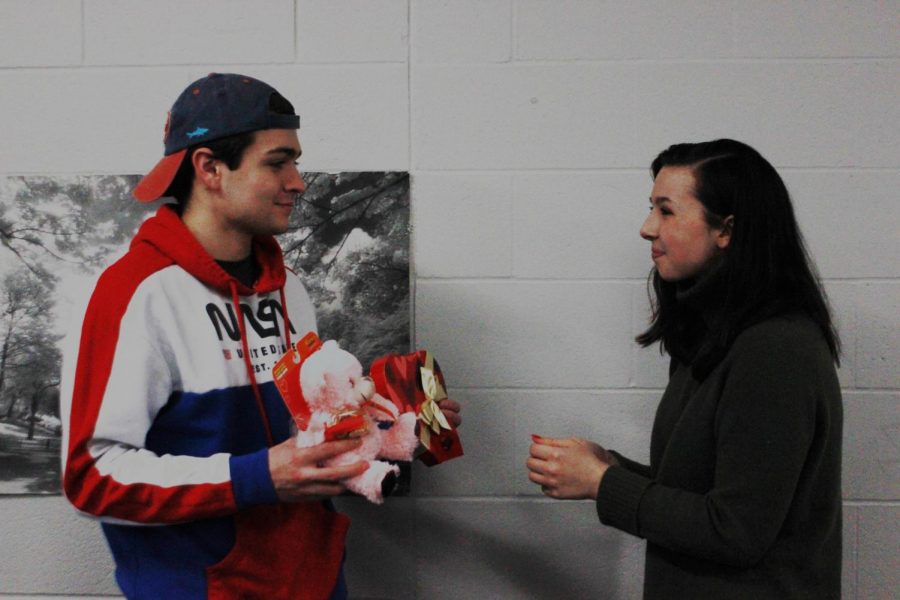 Each year, as Valentine’s Day draws closer, ads for expensive jewelry play on the radio while stores are stocked with chocolates and stuffed animals. Some couples embrace these cliches, while others reject them.
Junior Gabby Boldt debated whether or not to celebrate Valentine’s Day at all due to the crowded restaurants and expensive meals, but ultimately, she decided to indulge in a fancy dinner with her boyfriend.
“My plans are to go to the Plaza in Kansas City and have dinner with my boyfriend,” said Boldt.
Like Boldt, senior McKenna Wilson intended to go to dinner with her boyfriend. While she chose to give her boyfriend a small gift, Wilson feels that people spend too much time obsessing over the clichés.
“I think doing something for Valentine’s Day is really sweet, but the expectations are way too much. It’s cool that there is a day for couples, but really, everyday should be. Valentine’s is more of an excuse to be together,” said Wilson.
While many of the expectations for Valentine’s Day revolve around materialistic concepts, senior Alec Heriford believes that is not the core purpose for the holiday.
“I think people expect Valentine’s Day to be a day dedicated to showing your love to your significant other by buying expensive gifts, but I believe it should really be about spending time with each other,” said Heriford.
Although some people may feel pressured to conform to the expectations, Wilson feels less influenced by society’s expectations because she has been dating her boyfriend for a relatively long time.
“It’s been three years [since we started dating], so there isn’t any real pressure to do something huge,” said Wilson.
Heriford likes some of the clichés, such as gifting chocolates, but he also believes it is hard to participate in them as a high school student.
“I can’t afford any expensive gifts, so expectations can be pretty hard to meet. I’ll just have to show my love in a different way,” said Heriford.
The clichés surrounding the holiday are complicated as couples want to show their affection, but they also do not want to indulge in the belief that gifts are the only way to show their love. While Boldt did give her boyfriend some stereotypical gifts like chocolate, she recognizes the expectations should not control people’s experience.
“If it is something people enjoy, I let them enjoy it. I like certain aspects of the season and love all around, but I do not think it is necessary to celebrate to show someone you love them. The roses and dinners and everything may be really sweet, but it is not imperative for a relationship,” said Boldt.
Some students like the clichés surrounding Valentine’s Day, and some students disapprove of them. Although some may fall into the clichés, it does not take expensive chocolates or jewelry to show appreciation for loved ones.