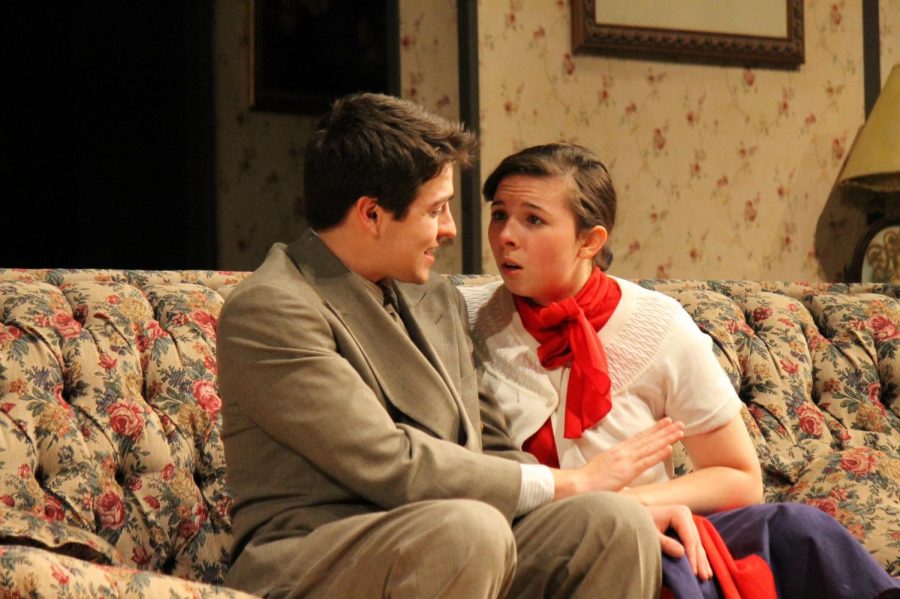 Lost in Yonkers is a play that is unlike other plays, it only has a seven person cast, which is quite a smaller number cast than typical plays. Having a smaller cast leads to more things that a normal sized play wouldn’t have to deal with, like the trouble of advertising it, the connection with the cast members, and having to learn more lines, but cast members get to know each a lot better.
Lost in Yonkers is about two boys whose dad that has to go out of state to sell their apartment, which results in the boys having to go live with their grandma that is really mean and it goes through the challenges that they have to face. Having only seven people in the cast means that the chances of someone getting a role is lower, which is something that one of the cast members, Senior Abigail Ball, remarks on how their are different things you can do to be better prepared for the auditions.
“Get involved before hand, show that you care, and research the show. Be open to have any role because let’s say you want the main role, you may not always get it. And always work hard,” said Ball.

Performing a play in front of a crowd without messing up is hard enough, but being one of the youngest crew members can also be challenging. Sophomore Aiden Martel is one of the younger crew members and hasn’t done a lot of plays in front of big crowds at an older level like the other crew members.
“For me personally, it is the first big high school play that I have ever been in and the process of putting it together has obviously been more difficult by having more lines than before and the process is different,” said Martel.

Director of the play, Todd Schnake, enjoys having a smaller cast every so often because he also gets to have a deeper connection with the cast. One thing that he dislikes about having a smaller cast means that there is a smaller opportunity for people to be casted.
“A smaller cast is a lot easier to coordinate things with and it’s hard sometimes because you want to give as many opportunities as possible to people and we are doing 2 other large shows this year so there’s plenty of opportunity their. Also, with the smaller cast, you dig deeper with your character because you are simply dealing with smaller amounts of people and there’s a better opportunity to connect with them,” said Schnake.

Musicals have things that many plays don’t have, like dance numbers, songs, and a big cast, which are all things that Lost in Yonkers cast don’t have to worry about. The process of doing things are different than having a bigger sized cast or a musical, which is something that Ball likes about doing this play.
“I’ve had no time, but it’s been awesome. It’s really been my favorite show and we’ve all gotten really close to everyone. It is also not as crazy as a big cast and you get to know everyone and develop family and closer relationship,” said Ball.

Having a smaller cast comes with having some difficulties for every single person, but also with the whole cast as a whole. Junior Denton Meehan talks about how having a small cast comes with some obstacles.
“One of the biggest difficulties is advertising. In a 60 person cast, it’s easy to get the word out, but having 7 people means that it becomes extremely difficult to spread the word,” said Meehan.

Go to state is a huge ordeal for anyone that is passionate about what they do. Schnake and the cast want Lost in Yonkers to be chosen to be screened at the State Thespian Conference at the music hall in Kansas City on December 3rd in front of two thousand people, which would be a big accomplishment for the cast and the director.
“First you have to submit that you want to be screened or judged and then they send the judge and they come and watch the play and they send back weather they recommend it or not recommended and if they liked to play a lot then that goes to the board and they see all plays submitted and they think what would make for a good conference this year. They look at the factors of a play being good but also if there may be a school that hasn’t shown before that’s good and only 2 plays get picked,” said Schnake.

Having the involvement of being in a play with a small cast is something that Martel enjoys about being picked to be in the play. Even though having to memorize more lines is more troublesome, he likes that he can get to know everyone really well.
“The experience of being with a small group of people for an extended period of time and helps you grow as an actor and it is indescribable of the friendships that you make,” said Martel.

With being in a bigger cast means that a person can become overshadowed and not know what they are doing all the time, but still be fine. That is not the cast with having a smaller cast. The smaller cast brings the crew closer together and the cast helps support each other more into helping them know what they are doing so that the play can be the best that it can be and no one is overlooked.
“I would love to do another 7 person show. I find them more fun and personal than a larger cast show. You become very close to the people in the cast and you just don’t get that kind of interaction in a large cast show,” said Meehan.

Having a seven person cast makes the play stand out enough, but the crew has been working their hardest to make the play go to the State Thespian Conference. This is huge for the people in the crew because it can get played in front of two thousand people.
“Since it’s such a small cast of people, we’ve gotten to know each other really well and we are also trying to take the show to show it in front of 2 thousand people and to accomplish this we have been trying to make it really good and push each other to do their best,” said Ball.

Lost in Yonkers play isn’t something that is easy for the cast to do because of the many challenges that they face, like having a small cast, knowing more lines, and getting the play to be seen by a lot of people is difficult. By overcoming the challenges, the crew have been close with each other and have been working together very hard to make the play be shown at the State Thespian Conference.